PLEASE NOTE: Due to high demand, production time will increase on January 16th. Thank you for your patience! 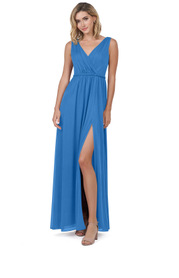 The lovely Floor-Length, Floor-Length bridesmaid dress by azazie has an A-line/Princess cut in an exquisite Mesh. Style Azazie Tanicia features a V-Neck neckline, and comes in a full size range (A0-A30). A pleated detail at the front and back of the flowing skirt makes it perfect for the reception or a city hall wedding.