Take our quiz & say 'I do' to your dream dress!

What's the color theme for your event?

Which dress length do you prefer?

What features do you want on your dress? 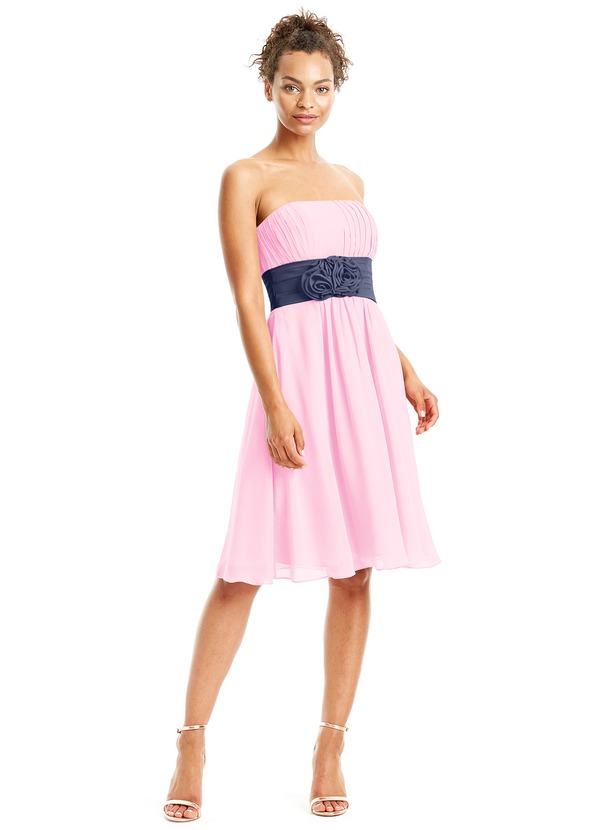 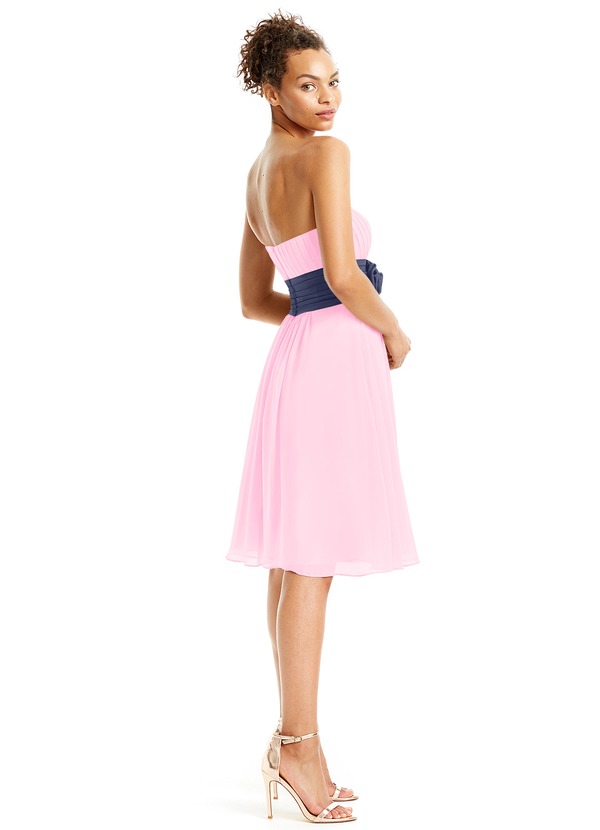 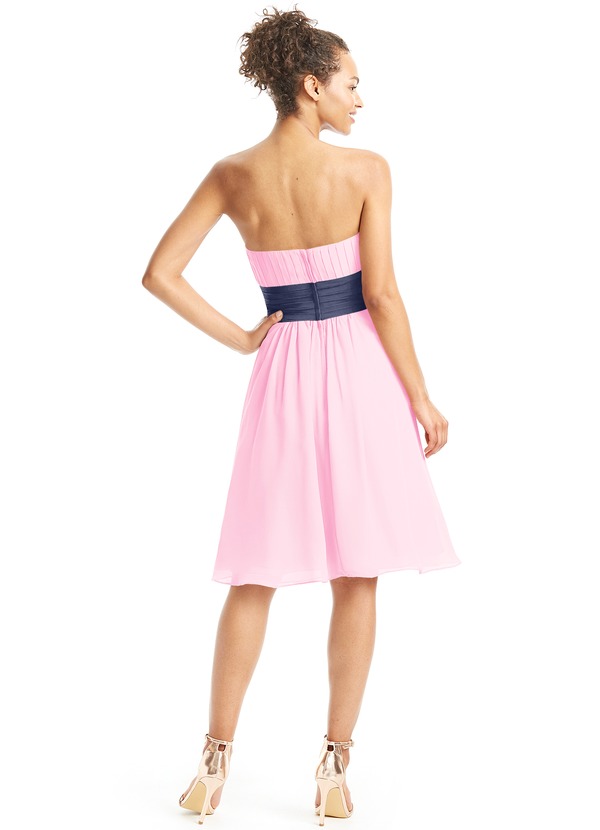 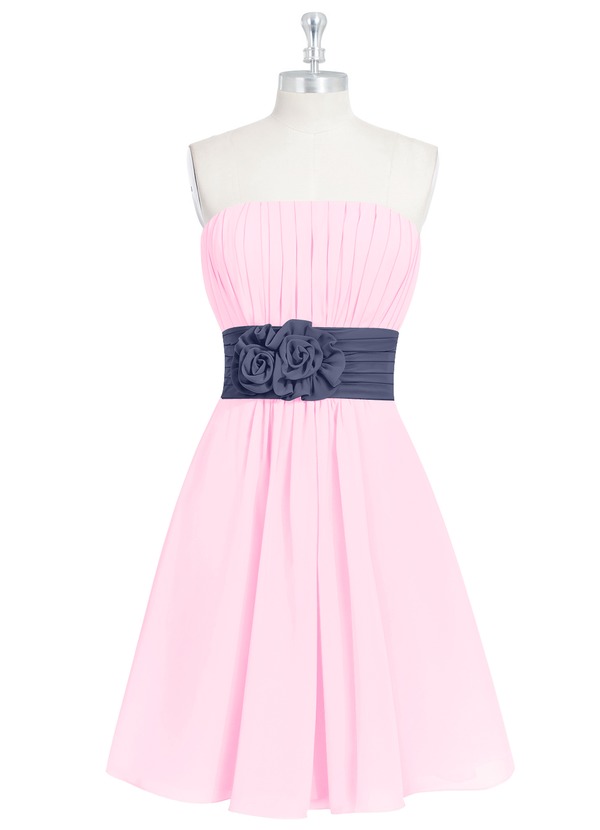 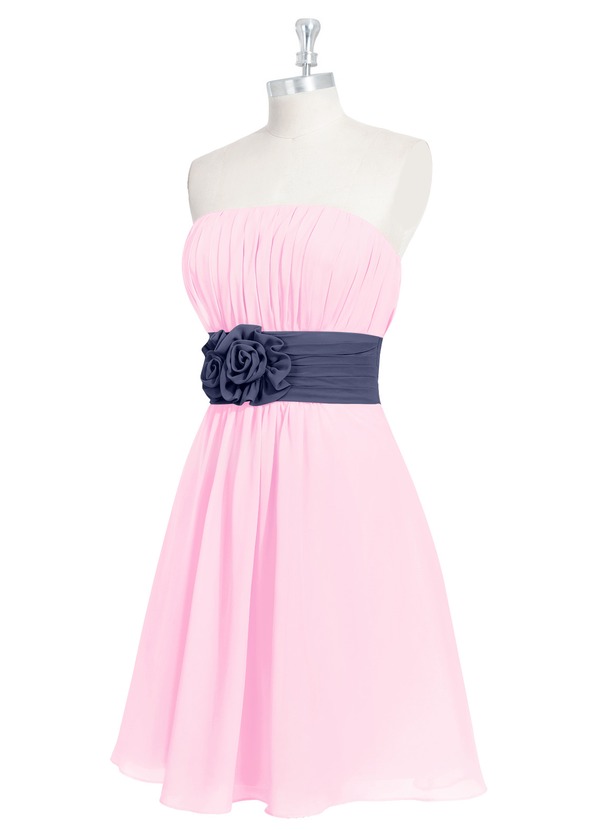 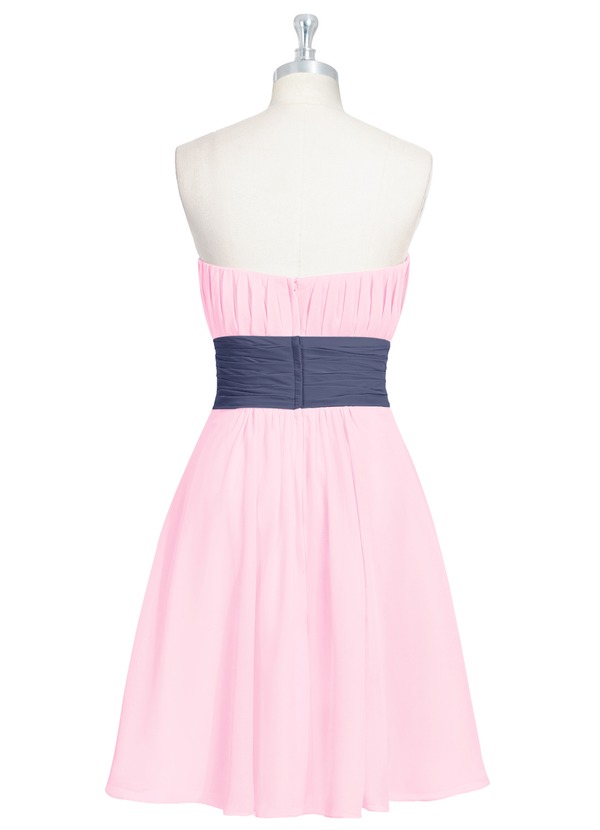 99
Product Details
Details
- Straight dress features a back zip at back.
- Knee length chiffon dress.
- With padding and boning.
- Model is 5'9 (175 CM). She is wearing a standard A4 (hollow to hem 38'').
We know no two bridesmaids are alike. That's why this gown was designed with extra length to keep the varying heights of your bridal party in mind. It can be easily altered to create the perfect fit.
Ask a question
Description
Order Swatch
Color may vary between different fabrics. Make sure you order swatches first!
Order Sample
Shipping Time
Shipping is an additional 1-10 business days depending on location. Shipping time will be provided at checkout.

Q.
When I measure the length of the dress do I measure hollow to floor or hollow to my knees since this dress is knee length?
A.

You should measure hollow to floor, even though the dress is knee length. It is critical that your height and hollow-to-floor measurements are correct. What happens is that we have a program that helps us alter the pattern to the correct sizing for your measurements. It uses the height and hollow-to-floor to calculate where the neckline, waistline, and hemline should fall.

Unfortunately, in order to maintain quality and control, we're unable to make any changes to our patterns and designs, including adding or removing straps. I am so sorry about that! You can find our knee length dresses that are designed with spaghetti straps here.

While we do offer custom sizing as an option, we are not able to offer custom design options at this time. We take quality very seriously and to stay consistent, we're unable to make any changes to our patterns and designs, like adjusting the length of a knee-length dress to floor-length, removing embellishments, adding sleeves, changing fabrics, adding or removing slits.

Because of the fitted waistline as well as the customization limitations, we do not recommend this style for maternity. When it can be, the dress usually needs extensive alterations to fit comfortably. We would recommend our wonderful Maternity Line with a variety of styles made to accommodate a growing belly and to take the stress out of sizing.

We also have several non-maternity styles that we can make to maternity sizing: Francesca, Kaitlynn, Shannon, Remi, Oceana and Annabel. see less

Because of the fitted waistline as well as the customization limitations, we do not recommend this style for maternity. When it can be, the dress usually needs extensive alterations to fit comfortably. We would recommend our wonderful Maternity Line with a variety of styles made to accommodate a growing belly and to take the stress out of sizing.

We also have several non-maternity styles that we ca... see more

The dress is very pretty, but the sizing chart is way off. I originally ordered a different dress, based on matching my measurements to those in the sizing chart, and when the dress arrived it was far too large. I returned it and ordered this one, going down one size in the standard sizing chart (I was worried about going down two sizes, since that was WAY smaller than my actual measurements, and it's harder to deal with a too-small dress than a too-large one). This dress arrived just in time for the wedding, and was still too large. No time for the elaborate alterations that would be needed on a dress with so many layers/much fabric, so I sewed pieces of elastic into the dress - like a bra strap for the dress - so that at least the inch gap between me and the dress would be in the back instead of the front. That worked, dress stayed up, looked very pretty. I will take it to a seamstress and see how much it will cost to alter it to fit me, as I would love to keep it. If it's going to be expensive, though, I'll just have to sell it.
Was this review helpful to you?
Yes (1) No (0)
Erica Smithee Loewe
Reviewed On: August 18, 2017

The dress arrived in beautiful condition, and was of very high quality. However, for my small frame, it totally overwhelmed me. I also have relatively large hips, and the additional fabric on the bottom only accentuated this. But, the dress did fit perfectly - just needed a different style!
Was this review helpful to you?
Yes (0) No (0)
Sandydink
Reviewed On: March 03, 2017

This dress fits perfectly! I have not ever bought clothing online and was fearful that the workmanship would not be good. This dress changed my mind about online shopping. Absolutely beautiful!
Was this review helpful to you?
Yes (0) No (0)
Lavivica Watts
Reviewed On: April 25, 2016

I absolutely loved these dresses, they wear stunning and perfect fits and made my wedding look beautiful.
Was this review helpful to you?
Yes (0) No (0)
cassienormand
Reviewed On: October 07, 2015

The dress was perfect it fit wonderfully.
Was this review helpful to you?
Yes (0) No (0)
stellamerteuil
Reviewed On: September 23, 2015

Gorgeous dress, wonderful quality. It fit my stepdaughter perfectly based solely on measurements.
Was this review helpful to you?
Yes (0) No (0)
nelsonkatieanne
Reviewed On: August 24, 2015

The dress is very true to size. I used my exact measurements and the dress came and fits perfectly. However, I am disappointed in the lack of attention to detail that was paid when making this dress. The dress is supposed to have a small clasp at the top of the zipper in the back. The dress that I received however, looks like it was sent out before it was completely finished. Only one side of the clasp was sewed on, making it useless, since it has nothing to attach to on the other side. It's a small detail, but I paid more than $100 for this dress that is supposed to be "hand made." One would think that this detail wouldn't be overlooked.
Was this review helpful to you?
Yes (0) No (0)
sarah_6_08
Reviewed On: July 29, 2015

This dress is just as I imagined and arrived super fast!
Was this review helpful to you?
Yes (0) No (0)
Jill Donahoo
Reviewed On: November 20, 2014

They thought the dress was very elegant yet stunning, and loved the colors!
Was this review helpful to you?
Yes (1) No (0)
SEE MORE REVIEWS
BACK TO TOP

SEE YOU AT A WEDDING EXPO NEAR YOU >